Clea helena or Assassin Snail is a species of freshwater snail with an operculum, an aquatic gastropod mollusk in the family Buccinidae. This species occurs throughout southeast Asia, especially in Malaysia, Thailand, and in Lake Toba on the Indonesian island Sumatra. The snails we offer originate from Thailand. They primarily inhabit small bodies of water, and are most commonly found in ponds or ditches. They prefer locations with a sandy or muddy substrates, and these conditions should be reproduced as closely as possible in the home aquarium. Assassin snails do particularly well in captivity. The average life span is around two years, though they can easily exceed this age in a well maintained aquarium.

Assassin snails really only thrive in mature aquariums. It should be noted that Clea helena do not breathe air like most other aquarium snails. Because of this, they are very sensitive to the water quality. They must be provided with a soft substrate that allows them to burrow. Sand is generally the best choice, but there are numerous other substrates on the market that will also work. Adult assassin snails spend much of their time in the substrate, and they often ambush other snails from their position of concealment there. Assassin snails have no interest in aquatic plants, and are safe in any planted aquarium. In fact, many people keep these snails in aquascaped tanks to deal with any unwanted pest snails that may be accidentally introduced. A word of caution though – there have been numerous reports of assassin snails eating fish eggs, and even immobile wrigglers. So they should not be kept in breeding tanks, unless you are breeding livebearers.

An assassin snail’s natural diet is mainly composed of other species of snails and worms, though they are also opportunistic feeders. They will eat almost anything that they can scavenge, and this includes decomposing fish and other small invertebrates. Because of their varied diet, they are very easy to feed in the home aquarium. If there is a significant snail population in their tank, then there is often no need to feed them at all. However, if there are no snails for them to eat, then they should be fed with a high protein food. Some aquarists feed them frozen blood worms, or brine shrimp, but any sinking food will do. Clea helena may be a serious threat to native freshwater gastropods in countries, when introduced.

This snail will typically grow to 20 – 35 mm in size depending on food sources, usually smaller in the aquarium. The shell, which is conical in shape, consists of dark brown and yellowish tan bands, leading to some people to refer to this snail as the bumble bee snail, a name also applied to the marine snail Engina mendicaria. The snails will spend much of their time buried in their substrate. They are least active during mid day, however they can sense food and will become active if fed.

Clea helena consists of defined male and female individuals which are not hermaphroditic. Currently it is not known how to identify which is male and which is female. Both males and females seem to be the same size and shape. When a male and female mate, they lock together for many hours. The female lays several clear egg capsules which are square in shape and approximately 1.0 to 1.5 mm in width and height. Each egg capsule contains a single small yellow egg. The egg capsules are generally laid on solid surfaces such as plastic and often on the base of plants. Fertile eggs usually hatch within a few weeks (usually between 3-8 weeks), though the amount of minerals in the water can influence the incubation time. Once hatched, the juveniles will burrow into the substrate, and are rarely seen again until they reach maturity. Maturity is usually reached after about six months, and at this time, they will emerge from the substrate more regularly. They breed very slowly for a snail, and so rarely become a pest on their own. However, they can be difficult to completely remove from an aquarium, since they spend so much of their time buried in the substrate.

Assassin snails themselves are preyed upon by larger cichlids, or any of the more common snail eating fish. While they are protected by an operculum, they will often become injured and stressed from the constant attacks of a fish. If the attacks continue, they will either die, or have a greatly shortened life span. Almost any other snail that is kept with an assassin snail is at risk. While extremely large snails like apple snails are generally safe, it is not unknown for assassin snails to “gang up” on larger snails, and devour them. Only place these snails in an aquarium if you are prepared to lose any snails that share a tank with them. Assassin snails are renowned for their ability to deal with problem snails in an aquarium, and just a handful of these snails can deal with even a massive Malaysian trumpet snail infestation. Because of this, they are rapidly growing in popularity. 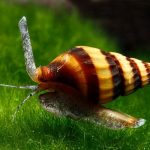