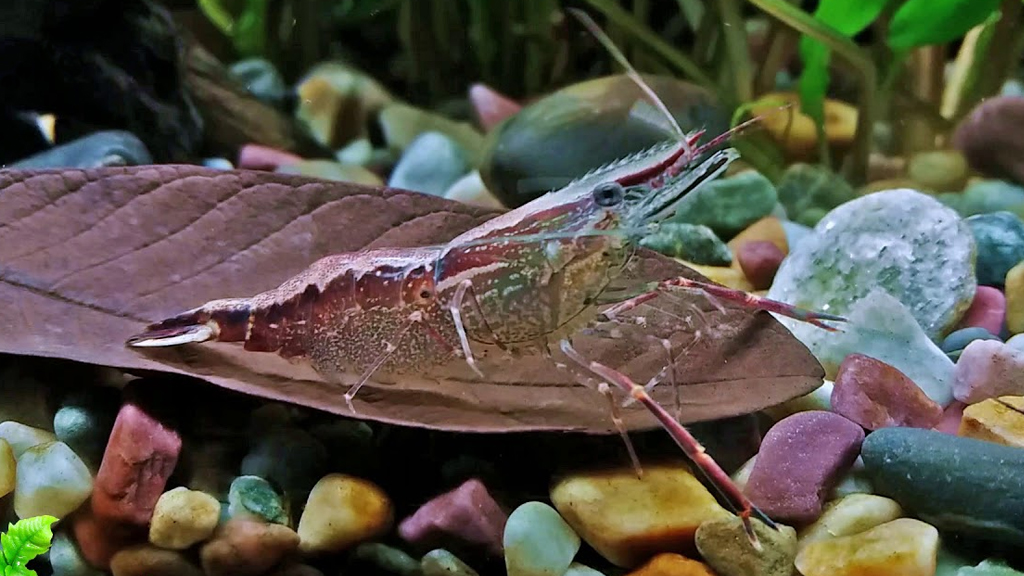 For those seeking something a bit different in the way of freshwater invertebrates, the Chameleon Shrimp may just be what you’re after. This interesting shrimp grows large, but not too large, and boasts some interesting patterns and peculiar morphological specializations.

But first, it is vital to precisely define which species we are talking about here, as more than one aquarium shrimp has been given the common name of Chameleon. Many shrimps are capable of changing their colours to match their surroundings or may change their colours dramatically as they age, so it’s not surprising that this name has been used elsewhere. For instance, there is a «chameleon shrimp» in the aquarium trade that is said to come from Northern Australia and which is a close relative to the Caridina shrimps, like the ubiquitous Cherry Shrimp. In Europe, you’ll find a Mysid Shrimp going by this common name, Praunus flexuosus, but the species we’re concerned with today is neither of these.

Macrobrachium scabriculum is the name generally given for the most common aquarium «chameleon shrimp». This genus is immense, with somewhere around 250 recognized species, and these shrimps generally reside in freshwater, with a larval stage that takes place in brackish or saltwater. For Macrobrachium scabriculum, the stated range stretches from the drainages of Eastern African to Borneo in the Pacific Ocean. You’ll find this shrimp in fast-flowing riffle areas of clean streams, lurking about the cobble in search of whatever edible morsels are present.

Juveniles are most commonly available and appear translucent, only acquiring their handsome patterning of striped earth tones with maturity. This is apparently where the chameleonic name stems from.

Fully grown aquarium specimens of this shrimp have been measured at around 3 inches for males and 2 inches for females. The sexes are easily told apart, as males develop an enlarged pair of claws on the second pair of legs, giving them a lobster-like appearance. These claws also develop a short, beige covering of hairlike growths, though usually only one of the claws, either right or left, seems to have this. Why this is so and what purpose this sexual dimorphism has is unknown at the present time.

Aquarists are likely already familiar with one of this shrimp’s larger cousins, Macrobrachium rosenbergii, the Giant River Prawn. You’ll see juveniles of this monstrous shrimp on occasion, and the adults make for a striking, albeit untrustworthy, addition to aquariums. That species is quite capable of taking down its piscine tankmates for a snack, but the Chameleon Shrimp is generally quite harmless, though the potential may exist for the very smallest and most sluggish of fishes and fry to fall prey. Other crustaceans, like Cherry Shrimp, have also been noted to be harassed.

In typical shrimp fashion, Macrobrachium scabriculum is a scavenger. In all but the most understocked of systems, there is likely little need to directly feed this shrimp. Specimens are secretive and will usually hide, accept to come out for food. They will also compete for whatever dark recesses exist in an aquarium, which may be of concern when housed alongside other reclusive creatures. Multiple specimens can be housed together, though males may prove quarrelsome in tight confines, breeding seems unlikely (and is unreported) in captivity, owing to the care requirements of the larval stages.